New evaluation board for Allystar HD9310

The quasi-zenith satellite (QZS), or Michibiki, broadcasts not only positioning signals but also its highly accurate augmentation signals. In order to receive this CLAS (centimeter level augmentation system, it pronounces as Cirrus) signal and MADOCA (multi-GNSS advanced demonstration tool for orbit and clock analysis) signals, we need receiving the frequency at 1278.75 MHz, called L6-band.

On the old Board, there were four LEDs: 1-PPS (pulse-per-second), power supply, USB port TXD (transmission data), and RXD (reception data). However, the 1-PPS LED on the old board remained off. In addition, there was a switch to set whether to supply power to the antenna on old board. 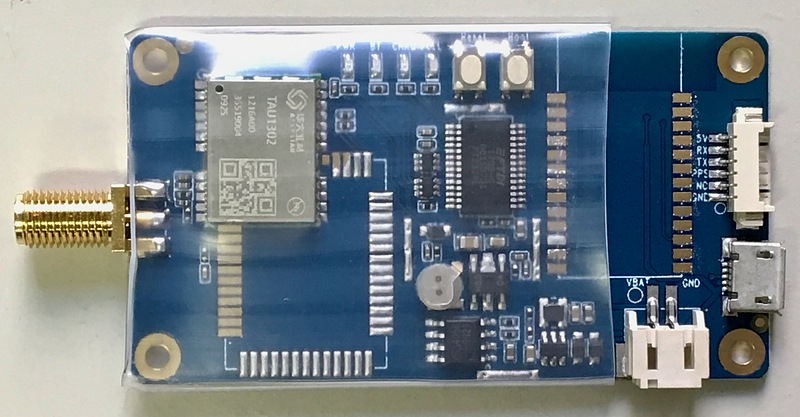 This is the new board. It is now covered with heat shrink tubing for insulation. In addition, the connector on the upper right had the following markings.

I’m glad that the signal can be taken out. In addition, a JST PH 2-pin connector, which seems to be used for connecting lithium-ion batteries, has been added to the lower right of the new board. We can see the marks VBAT and GND near the connector. The open circuit voltage of this connector terminal was measured and found to be 1.8 V, and it seems that the voltage is low to charge the lithium-ion battery. The model number of the battery management IC could not be read.

In addition, this new board is equipped with a capacitor for storing ephemeris, which was not found on the old board. With the new board, we can reduce the time from turning on the power again to starting positioning.

On the other hand, the LEDs have been consolidated in the upper center of the board and changed to power supply (PWR), Bluetooth (BT), charging (CHRG), and charging complete (FULL). In addition, the power supply switch to the antenna has been abolished. This evaluation board does not have a Bluetooth communication function, and it is unknown how to use this battery charging function, so the previous one was better for LEDs.

Satellite signal reception with a antenna close vicinity to window

At the bottom of my laboratory window, I placed an antenna capable of receiving both the L1 frequency band (1575.42 MHz) and the L2 frequency band (1227.6 MHz), and received this L6 band (1278.75 MHz) satellite signal. The L2 band lies between the L6 band and the L5 band (1176.45 MHz). Therefore, I expected that the L6 band signal could be received using the popular L2 band antenna. There is an antenna on the roof of the university that can receive the L6 band, but here I tried L6 band reception with an antenna that can receive both the L1 band and the L2 band. The first is an unidentified quadruple helix antenna.

The result was that only some of the GPS signals could be received. Next, I connected TOPGNSS’s GN-GGB0710 to the receiver.

Compared to the previous antenna, this antenna can receive fewer satellites. In general, larger antennas seem to be able to receive more satellite signals. After all, the L6 band signal could not be received this time.

I am continuously observing CLAS signals on the old board. Therefore, I decided to receive the MADOCA signal on this new board, so I updated the firmware to that of MADOCA. The software version after the firmware update was 3.018bcc6590, which was the same as that of the previous CLAS. 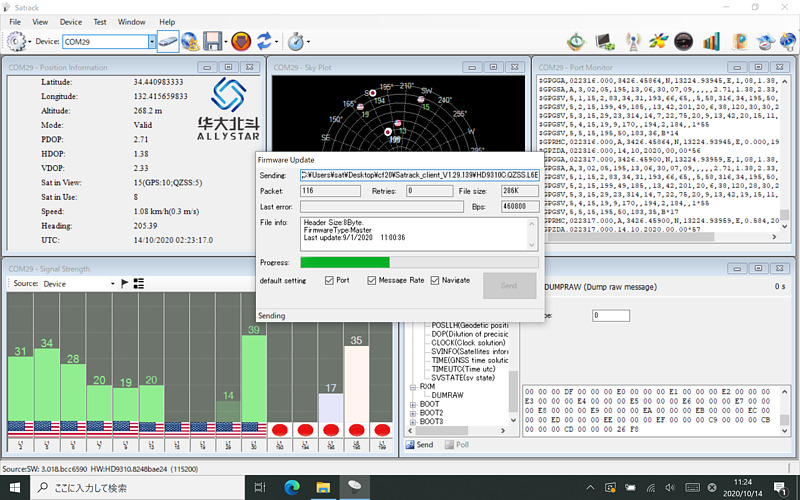 This new board was also installed on the roof of the university. This is a picture of the old and new HD9310 evaluation boards. 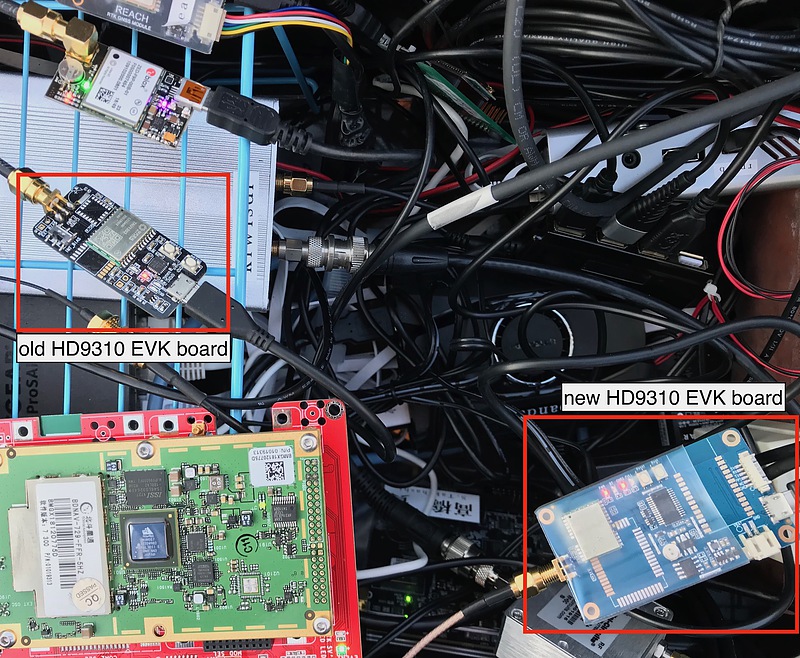 According to page 16 of slide at CGSIC in September 2020 by Dr. Kogure of the Cabinet Office of Japan, it seems that Michibiki Unit 6 will be placed over the Indian Ocean (S. Kogure, QZSS Update, CGSIC International Session, September 21, 2020). There was a link in the article by Professor Takasu of Tokyo University of Marine Science and Technology on September 23, 2020. Just as the tripod is more stable with its legs open, it is possible to secure this geosynchronous orbit because the positioning satellites at geographically separated locations can improve the position observation accuracy. I think Michibiki is moving in a technically interesting direction.