I also wanted to try out a new global navigation satellite system (GNSS) receiver. Previously, I wanted to buy a receiver equipped with either a bynav receiver module C1-FS or a Unicore Communications UB4B0, and finally I chose bynav one. However, I am still interested in a Unicore receiver.

This time, I introduced the Unicore UM982 receiver with 2 antenna inputs, which was released in August 2022. By performing simultaneous positioning with two antennas and calculating the difference in coordinates within the receiver, it is expected that the direction of travel (heading) can be obtained even when stationary. This receiver is also introduced in GPS World as “Unicore releases dual-antenna RTK module, the UM982”. 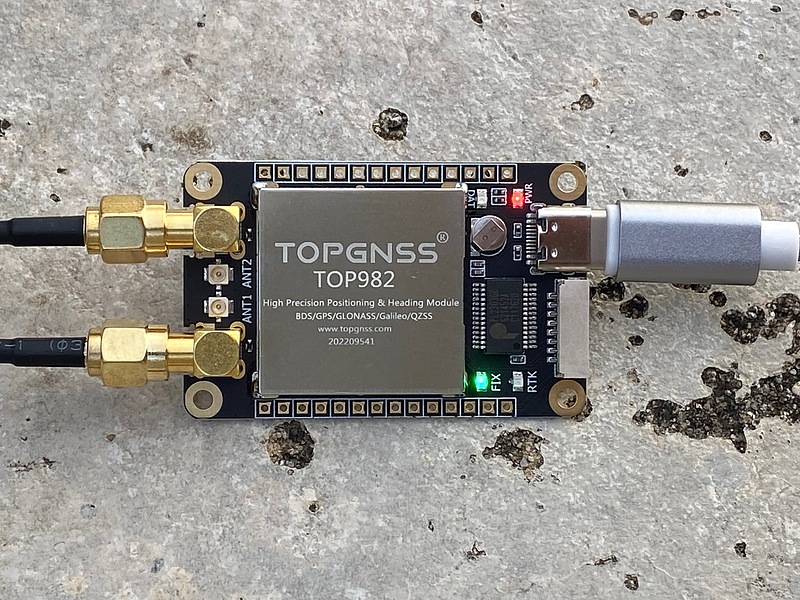 This UM982 adopts Unicore’s latest SoC (system on a chip) Nebulas 4 (UC9810). According to the product brief, it has 1408 simultaneous reception channels (!) of GPS, GLONASS, Galileo, and QZSS (quasi-zenith satellite system), and BeiDou. The SoC is two generations ahead of one of the previously reviewed UB4B0. The main antenna is capable of receiving

and the sub antenna is for receiving

In addition, both coordinates and azimuth angles in NMEA (National Marine Electronics Association)-0183 format and raw data in Unicore format can be output at 20 Hz. The module operating temperature ranges from -40°C to 85°C, which is suitable for automotive applications. If the module can really do all of these things at this price, this receiver is extremely amazing.

However, I was worried about using this receiver function because only a simple one (UM982 Installation and operation user manual, Version R1.1, 2022-09-09) was published as a manual.

There is no particular description as support software for this UM982, but it seems that uSTAR that runs on Windows can be used, so I will try satellite signal reception with UM982 using this. The version of uSTAR I used is uSTAR_R3.0.0_win32_Build2100. The screenshot of the supporting software used to introduce the Unicore receiver shows another piece of software called uPrecision, but I couldn’t find this uPrecision on the Unicore homepage.

The receiver I purchased is TOP982 from AliExpress’s TOPGNSS Store, which is a UM982 with an antenna terminal and a serial interface. The price was 650 USD.

This receiver kit included not only the receiver itself, but also two L1/L2/L5 frequency band antennas (TOP901) and two u.FL-SMA conversion cables. It’s ready to experiment with right away.

In addition, two SMA connectors for board mounting were included, and mounting points for these were also provided on the printed circuit board (PCB). I don’t like u.FL connectors, so I quickly soldered this SMA connector to the PCB.

The kit also included two types of serial interface cables and a serial-USB conversion board. I don’t need these parts at the moment, but I’m glad they are included because they can be used for other purposes.

I connected this TOP982 receiver to a Windows PC with a USB-C connector. Without any special driver installation, my PC recognized this receiver as Prolific PL2303 USB Serial.

Next, I fixed this receiver (center photo below) and two antennas on a cardboard box. ANT (antenna) 1 (right in photo) is the main antenna, and this antenna position is the coordinate reference. On the other hand, ANT2 (left in photo) is a sub-antenna and is installed in front of the main antenna in the traveling direction. 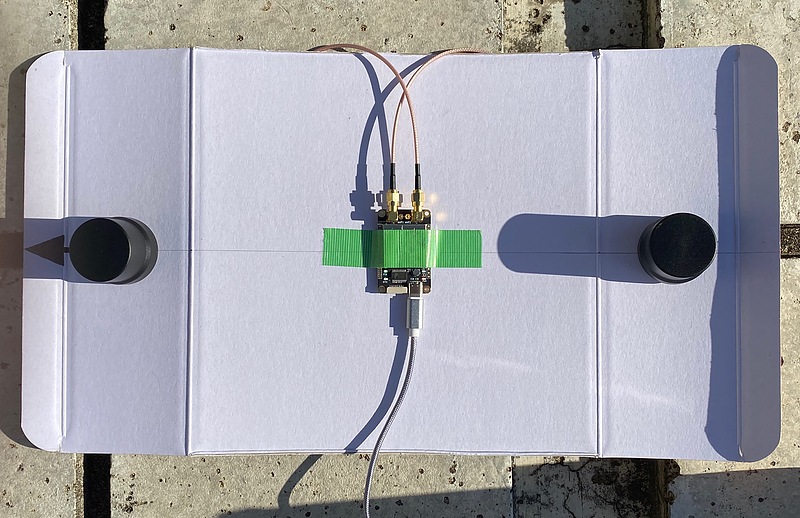 I put this up in line of sight at work to pick up satellite signals. About 10 seconds after the start of reception, the green FIX LED lights up, and it seems that the coordinates and traveling direction can be specified. Essentially, these antenna coordinates must be specified when using a two-antenna receiver. This receiver seems to estimate the relationship between the antenna coordinates by receiving satellite signals without specifying the positional relationship between the two antennas. 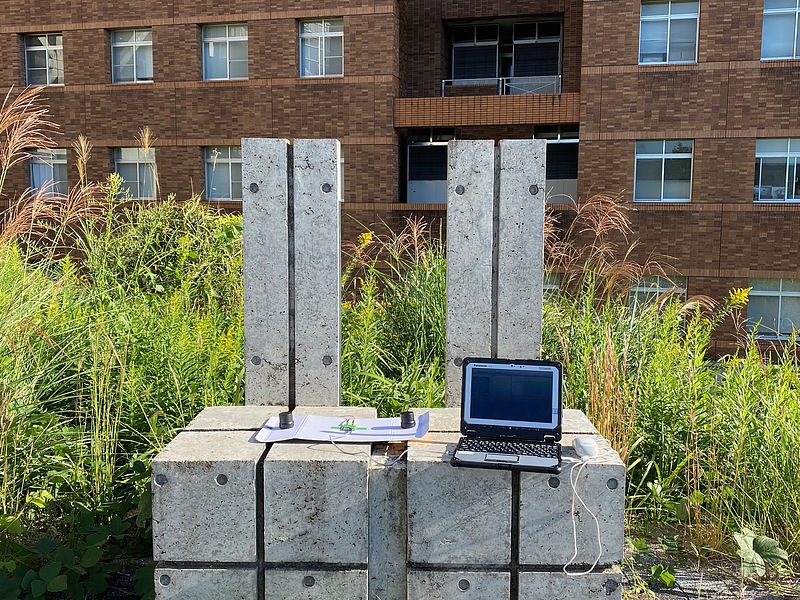 Then I launched the uSTAR software. We can monitor this UM982 receiver in action by clicking on the phone symbol on the top left of the uSTAR screen and selecting 115200 bps as the baud rate. The NMEA view and the NMEA column of Message Parse displayed a lot of data at an update rate of 1 Hz. However, nothing was displayed in the satellite arrangement (satellite view) or radiowave strength (CN0 view). They may show something for a moment, but it disappears quickly.

Looking at the NMEA messages, there were 3 sets of messages about the satellites of one satellite system (eg GPGSV for GPS, GPS satellite status in view). Since this receiver can receive 3 frequency bands, 3 sets of NMEA messages also appear. On the other hand, other Unicore receivers are dual-band, so I guessed that this software works by displaying two sets of NMEA messages and clearing the screen as soon as the next message arrives. So when you receive this third NMEA message in a row, you’ll see the screen clear and nothing. Coordinates are aggregated into one set of GNRMC (GNSS simplest navigation data) messages, so it seems that they are correctly read into the coordinate field in uSTAR’s Map view. 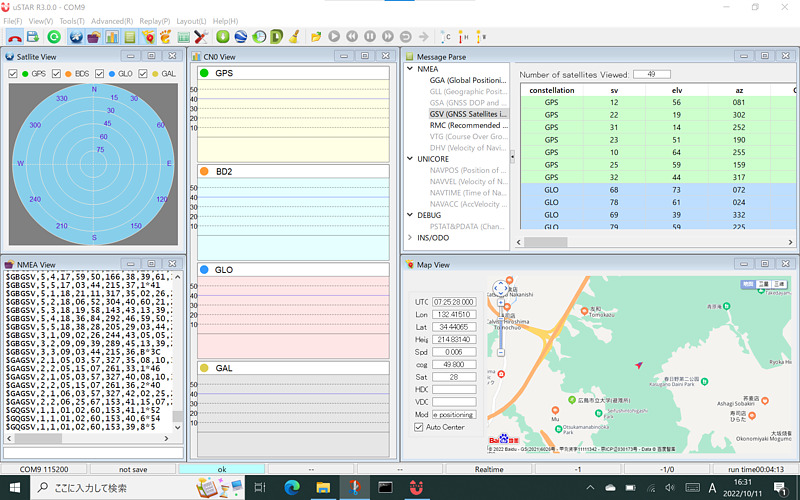 This uSTAR support software uses BaiDu’s services for map display. The location shown on the map was different from this measured location, but the coordinates are correct. The coordinates of this map data may not be correct.

The heading was shown in the GNHDT (GNSS heading) sentence of the NMEA message. The GNHDT message value fluctuates only about 0.2 degrees. When I rotated the antenna set, the value follows it, so it can be said that the uncertainty (defined by dispersion of measured values) is small. The accuracy (defined by reproducibility of measurements) also seems to be in that range of variation.

Then I set the direction to display true north on my smartphone app and measured this direction of travel. The heading angle showed 62 degrees clockwise from north. On the other hand, the value of the GNHDT sentence at that time was 53 degrees. I don’t know the correct answer for this direction or the reason for the difference between them. At Hiroshima, the location of this measurement, the deviation of magnetic north from true north (magnetic variation) is 6.5 degrees to the west. Therefore, this difference does not appear to be magnetic variation. 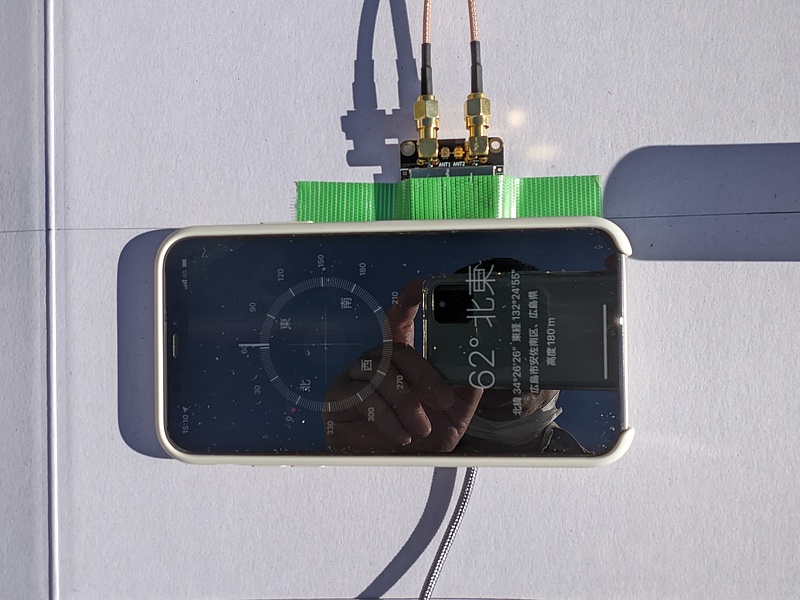 Also, UNICORE messages in View→Message Parse menu are NAVPOS(position), NAVVEL(velocity), NAVTIME(GNSS system time information) , and NAVACC (accuracy) only. There were no satellite system navigation messages or pseudoranges on the output.

I searched the Unicore website for receiver documentation, but could not find receiver setting commands or additional binary data. The same is true for Unicore receivers other than UM982.

Also, on article the GNSS Module using Unicorecomm boards, there was a command that seems to be for Unicore UB4B0. These are different from the configuration change commands above, so I expected to be able to change the settings, but I tried sending these commands to my UB982 and there was no change in the serial port output.

Next, I used the STRSVR application of RTKLIB ver.2.4.3b34 to display the contents of the serial port and save it to a file. I was able to confirm that the GNHDT message value changes according to the direction of movement of the receiver. I was expecting additional binary data on the serial port output, but the file content only contained NMEA messages. I also tried RTK positioning by injecting RTCM 3 messages of an RTK (realtime kinematic) reference station into this receiver using STRSVR’s bi-directional mode, but there was no change in its output. 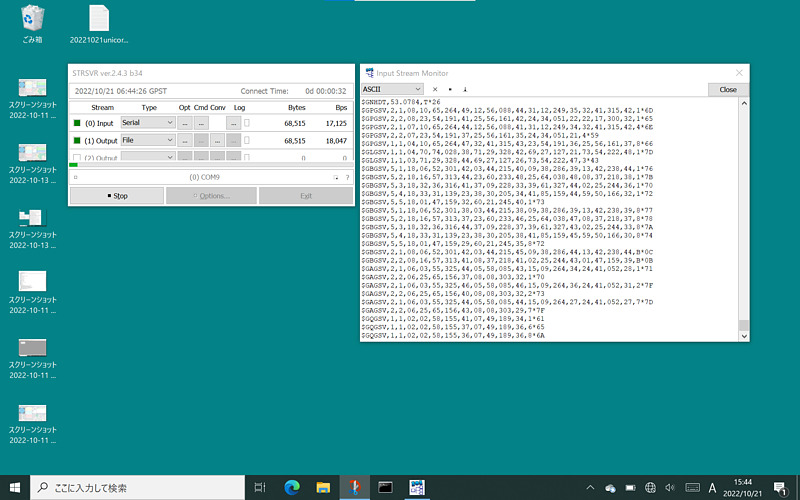 On the other hand, the heading message GNHDT indicated zero in an environment where the sky was not visible. 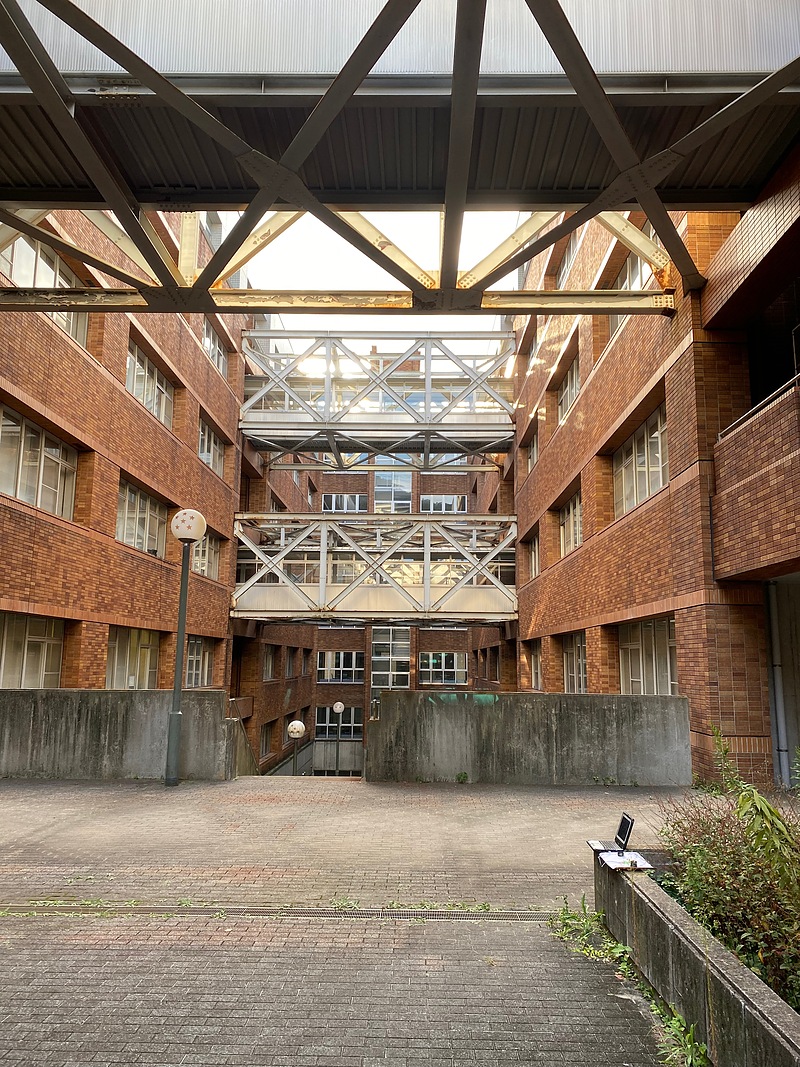 My UM982 receiver can estimate the direction of travel with two antennas, and seems to be able to perform high-precision coordinate estimation in three frequency bands. However, I could not find any public technical information on output settings for observed pseudo-range information, and output settings for satellite navigation messages. In particular, there was no documentation on settings for mastering the receiver. So I wasn’t too excited throughtout the experiment. According to the above-mentioned Users manual, the I2C interface and CAN (controller area network) interface of this receiver module will be supported in a future firmware update. Therefore, I look forward to the release of configuration commands, support software, and new firmware for the UM982 receiver module.

Introduced UM982 receiver from Unicore Communications. The direction of travel can be estimated even when stationary without any additional settings, and accurate coordinates can be estimated by measuring 3 frequency bands, so it seems to be highly practical. However, almost no information about the receiver settings has been made public, so the default settings will be used. At this moment, this receiver may not be a fun receiver for researchers.