Trial of Spresense, a Sony's board microcomputer

Sony has released an open hardware board microcomputer. It is a multi-functional board microcomputer aiming at being able to handle more easily than Raspberry Pi while it operates faster than Arduino and mbed. Software development can be done using Arduino IDE or special tool. For features and details, please see Spresense’s Homepage.

I am interested in microprocessor part with low power consumption, high resolution audio, camera interface and high speed microSD interface, but I paying particular attention to the fact that GPS (multi GNSS) receiver is installed here in particular did. There is time synchronization as one of key ideas of Sony LPWA. Multi-GNSS receivers tend to inherently consume large amounts of power to perform the correlation calculations. I am interested in realizing GNSS with low power consumption. Wi-Fi and Bluetooth interfaces are not attached in the microcomputer. There was an example of using USB type Wi-Fi as a sample sketch.

The Spresense’s price is more expensive than Arduino’s price. If we purchase both of the main board and the expansion board, it costs higher than cost of Raspberry Pi. However, I tried trying to know why Sony produced a board microcomputer. We can try GNSS functions without an expansion board. The expansion board has a microSD card interface, a socket for high resolution audio, and a pin that can be used for Arduino shield.

The package is made of thick paper, and it is similar to Arduino’s package. The package design is marked with S, an abbreviation of Spresense. 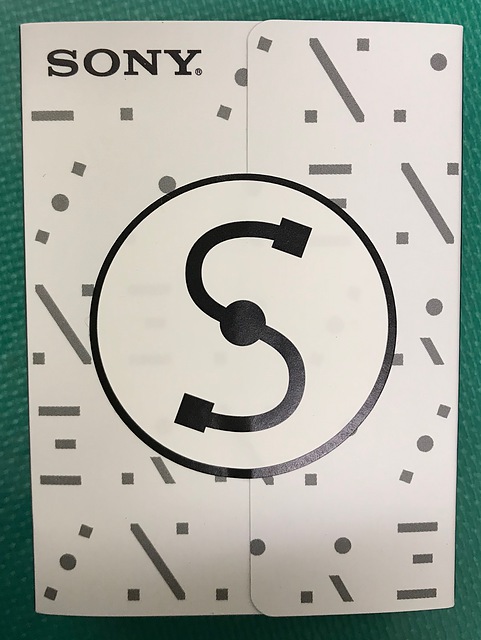 It is a picture of the surface. The main body is much smaller than Arduino or Raspberry Pi, slightly smaller than mbed, and slightly larger than the Intel Edison main board. If you attach an expansion board, it will be the same size as Arduino. 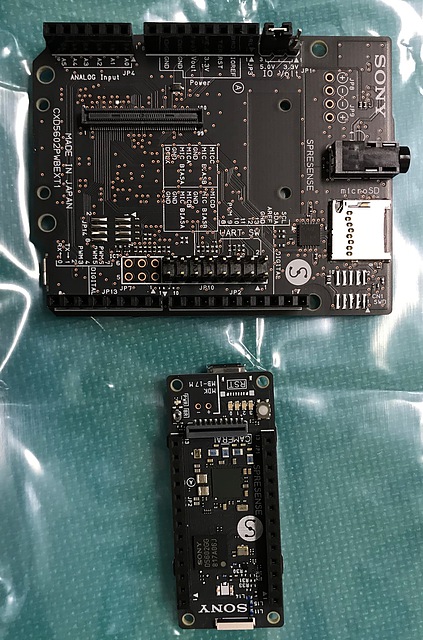 It is a picture of the back side. Connector similar to Intel Edison which is called B2B connector is attached to the back of the main body. The Intel Edison connector have specified that the maximum insertion and removal number is 20 times, but the maximum number of insertion and removal of Spresense have not been announced. ![Spresense back](/img/first-trial-of-sony-spresense 3.jpg)

Then, connecting the main unit to the expansion board, we can use a high-performance board microcomputer with Arduino interface. 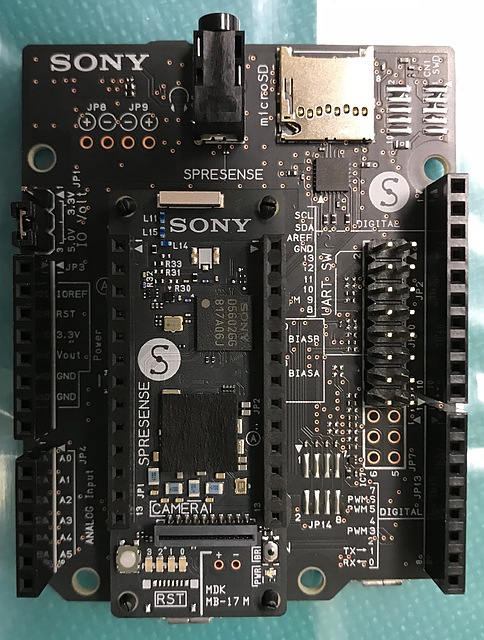 Using the Arduino IDE, we first tried blinking the body LED. The four LEDs flash in order. This worked fine.

Next, I tried the audio function, and I encountered an error with the message “The MP3 playing library can not be found” on the console monitor in Arduino IDE, though I have placed the library on the microSD card.

Next, I tried the function to read and write microSD card. At first I could not read the microSD card, but I can read it more than once while trying. There were times when it worked and when it did not work. There seems to be compatibility between microSD card and Spresense.

Finally, I tried the GNSS function. Sample sketches of GNSS functions include GNSS reception status indication and GPS tracker to save GNSS reception data in microSD card in NMEA format, but here we tried the former outdoors. Although it says that the manual captures GPS satellites in a few minutes, I gave up because I could not catch even after waiting for 10 minutes It was.

I did not go well this time, but I would like to try it again.