Positioning satellites such as GPS broadcast the estimation results of their own position and the correction value of the internal clock and provide the information necessary for the positioning of the receiver. If you obtain the stationary receiver position only from the positioning satellite radio wave, it should stop at one point and be displayed. However, in reality it may appear to be moving. Most of such “positioning error” caused by:

There are two ways to alleviate these errors.

The first method is called the observation space representation (OSR). It assumes the reference station position is correct and estimates the relative position with that reference station. This is a method that aims at canceling the errors of item 1 to item 3 above all at once. RTK is classified as OSR.

The second method is the state space representation (SSR). It considers the error factors of each of items 1 to 3, and estimates each correction amount for observation value. [MADOCA](https://ssl.tksc.jaxa.jp/madoca/public/ public_index_en.html) (multi-GNSS advanced demonstration tool for orbit and clock analysis) is based on SSR and developed by Japan Aerospace Exploration Agency (JAXA).

JAXA provides the estimated values ​​of the aforementioned items 1 and 2 (such correction values ​​are referred to as “products”) and provides these products in real time via both the Michibiki No. 1 satellite and the Internet I. The correction value of error itemized by 3 is said to be completely canceled using multiple frequency measurements broadcast by positioning satellites. The third error itemized by 3 would be canceled by the user. The MADOCA product can be used all over the world because it does not contain the correction value of item 3 caused by the place of use.

The point of MADOCA is where the product is delivered in real time. The final answer of precise position and time correction value for each positioning satellite is published at final product by IGS (International GNSS Service) after about two weeks. In other words, MADOCA is constantly being evaluated because MADOCA product can be verified.

Anyone can use the MADOCA product for free if you have an equipment of receiving the L6E signal transmitted by Michibiki 1 satellite and the decoder. However, the receiver of the L6E signal is not yet in general. Therefore, by this time, I applied for MADOCA product via Internet distribution to try SSR. In the application form, the name of the affiliated institution, the address, the name, the contact address, the use field and purpose, the desired user name in the NTRIP format (It seems that the user name will be accepted unless already assign it), period of use, number of streams are filled out, and send it by attaching e-mail. I have applied for a period of 1 year, the number of used streams is 1. After that, there was a reply by e-mail, and the password for the desired account name was notified. 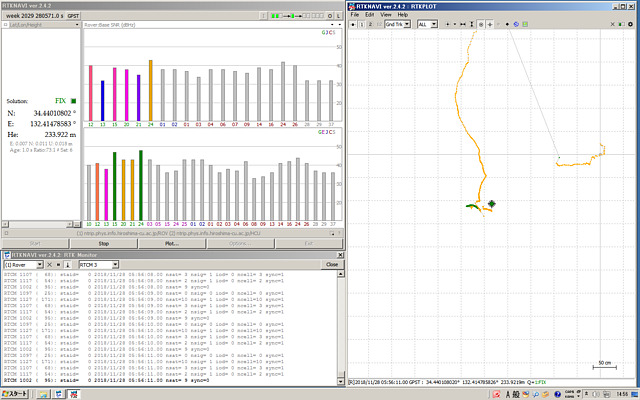 First, we show the result of measuring the stationary target positioning using RTK as OSR. Above is the position locus of the mobile station as the stationary target in the vicinity of RTK reference station. The mobile station is actually fixed, therefore it is ideal that it is fixed at one point. Although the results of single positioning (not shown here), they randomly showed a variation of about 5 meters in the east-west north-south direction. The RTK result reached the stationary fixed answer (fix solution) after trial of consistent position result of about 5 meters (float solution).

The reception setup is also described at the MADOCA product application page.

The PPP solution is obtained immediately after execution. 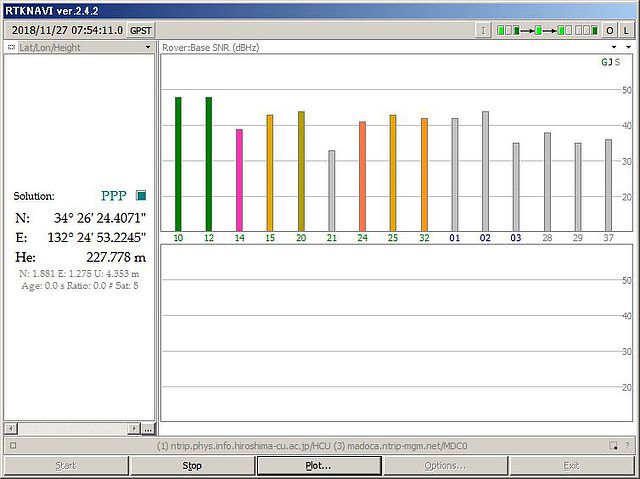 The position plot of MADOCA-PPP for this stationary target is as follows. 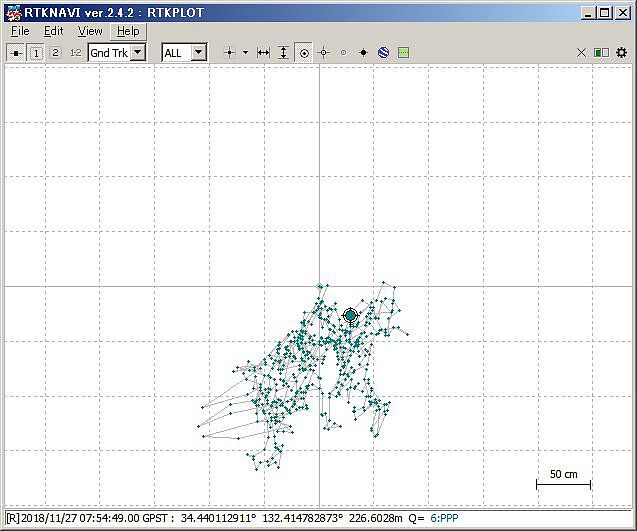 Variations in positioning results of about 5 meters in the east-to-west and north-to-south directions that existed in standalone positioning or RTK float solution decreased to about 1 meter with the MADOCA augmentation.

It is important to note that the result of this RTK and the result of MADOCA do not have the same latitude and longitude because of different measurement targets. In comparison target of RTK, we should change the setting between base station and mobile station.

It was found that the variation of the fixed target is reduced by MADOCA product.